When Vicki Treadell, the British Deputy High Commissioner in Mumbai (and the only woman Commissioner in the Asian sub-continent) visited London last month, the indefatigable Pinky Lilani OBE, successful businesswoman and Chair of the Asian Women Awards, reacted with customary speed and enthusiasm. Within days, Pinky harnessed the resources of Caspian Publishing’s diversity division to organise a drinks reception for Vicki. “I only heard a week ago that she was going to be here,” said Pinky, “but I was determined to gather together as many women in business together as I could to meet her.” 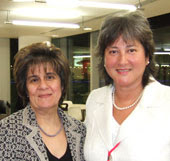 When I joined the crowd of women from business, commerce and law gathered at the Ernst & Young's offices next to City Hall on a blustery March evening, Pinky told me why she was so determined to welcome Vicki Treadell. "I visited India with a trade delegation in January, and led a meeting looking at the increasing importance of women in the economy, "she said. "We were given such support from Vicki that I felt it was important for her to meet businesswomen on her visit to London."

Vicki’s career began when she answered a crecruitment advertisement for the Foreign and Commonwealth Office. Initially looking for a job to fund her gap year, she quickly realised that the FCO could give her the career she really wanted. Her diverse background caused some confusion though. Born in Malaysia, of a Singapore Chinese mother and a half-Dutch, half-French father born in Ceylon, she settled in Britain with her family at the age of eight. She told us that her head of department at the FCO, David Gore-Booth, remarked on her first day, “I am confused — how can you be a British diplomat?”

Undeterred, Vicki worked in the Economic Relations Department in London before her first overseas posting, which was a challenging one for a woman - Islamabad in the early eighties. Then followed four years in Kuala Lumpur before moving back to the FCO in London to work on policy issues for Western Europe and Latin America.

Seconded at a senior level UK Trade & Investment (UKTI), the British government’s overseas commercial arm, Vicki Treadell was determined to get a truer picture of the commerce and industry of the UK than can be seen from the rarefied environment of Whitehall. So she spent three years with the North West Development Agency. Living and working in Accrington, Lancashire, she says, taught her a great deal about what it takes to run manufacturing companies.

This down to earth approach is proving invaluable in her role in Mumbai. “About half of what I do now is about business,” she said. “I'm there to help UK plc capitalise on opportunities in India, and vice versa.” Delegates from all sectors of UK business arrive every week and she tries to help by arranging introductions and sometimes lobbying officials for legal reform. 'Where we see a political issue not helpful to UK industry, we'll push for change,' she says.

Asked why she felt that public service was the career for her, despite her keen interest and support for business, Vicki told us, “I went into public service to rebel against my parents, who retired young after successful commercial careers. ”

She went on to recount another example of rebellious youth. It seems that older Indian women have great regard for the UK, its traditions and its values but their daughters and nieces are looking to the USA as the place to be and the place that delivers. “We got sick of hearing how wonderful Britain was, reading Jane Austen and Shakespeare,” they say, “so we are rebelling against tradition to find our own heroes.”

A lesson here for those promoting UK plc. The British film industry may be doing good (and well deserved) business with crinolines, bonnets and classic drama, but we need the diversity and determination of women like Pinky and Vicki to show the reality of today's Britain and encourage young women to make bold career choices.

Caption: Pinky Lilani (left) with Vicki Treadell in London, 5 March. Photograph courtesy of the The Telegraph, Calcutta.
Posted by sandirhysjones at 12:17