Phwoar, what a corker! 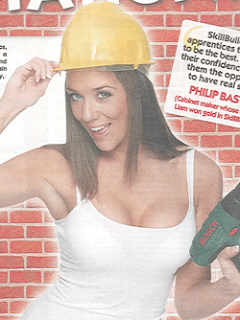 There I was, sitting in the Housing Forum conference this week, listening to the recurring theme of the difficulty in finding skilled people to deliver better quality homes, when scorching down the ether on to my Blackberry came the latest example of the ConstructionSkills approach to promoting careers in construction.

It was an advertisement in The Sun newspaper featuring a well endowed young woman in skimpy vest, hard hat, strategically positioned tool belt and Black & Decker at the ready.


'Are you ready to build a reputation?' ran the headline.

Was she one of the few young women responding to the £500,000 ConstructionSkills marketing and promotion campaign, I wondered. One who had found one of those elusive work placements on a building site? (See Women on the tools below)
Of course she wasn't. She was a photographer's model, tempting young people between the ages of 17 and 22 to enter for the SkillBuild competition to find the best builder in Britain. Ah, I get it, she must be the prize for the lucky winner. I jest.

The only good thing about this story is that Mike Bialyj of ConstructionSkills was not only attending the same conference, but was sitting on the Question Time panel. I asked whether such advertising was an appropriate way to recruit and attract more of the right people - including women.

Judging by the reaction of many in the audience, not to mention Mike Bialyj's fellow panellists, the ConstructionSkills ad was a big mistake. Initially defending it on the basis that it was good to include a woman to promote construction, Mike conceded that he had not seen the ad before it was printed and that on reflection, it was inappropriate. He apologised.

Come on ConstructionSkills, there is little point in spending money recruiting more young people, when colleges are full and employers unwilling to give work placements. There is even less point spending money on inappropriate advertising to young women, when evidence shows that the average age of women interested in construction training is around 30.

Finally, if you are going to feature women in advertisements, please use real women working in construction, talking about what a great job it can be. As Charmaine Young, of St George Regeneration pointed out at the conference, she could have provided some great examples
Posted by sandirhysjones at 17:52