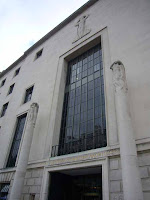 You can tell by the pitch of the voices as you pass through the imposing doors of the Royal Institute of British Architects, that homage to Art Deco in Portland Place, that the capacity crowd for the evening  is rather different to the usual RIBA event. The hallowed halls are thronged with women, of all ages, gathering to hear about Female Power in Architecture: who has it, who wants it, and how to earn it.

Chairing the event is the editor of AJ, Christine Murray, who decided to carry out the survey earlier this year,  just a couple of months after taking up her post. She was shocked by the low numbers of women working in architecture and also by the issues around pay. We need to identify believable role models, build confidence and address pay structures, she tells us.

Christine is introduced, together with the five women architects on the panel,  by the redoubtable Angela Brady, who is only the second female President of the RIBA since it was founded in 1834 (she succeeded the first President Ruth Reed last year, see Angela for President).

As I listen to the stories, and admire the professionalism, tenacity and humour of the speakers, I am struck by two characteristics:


* Five of the seven speakers run their own businesses (confirming my theory that most women in construction get to the top by being independent rather than employed, see Women rulers).
* Six out of the seven women on the platform came to Britain, rather than come from Britain.

Let's take a look at these powerful women in architecture.


Angela Brady was born in Dublin, graduated from Dublin School of Architecture and set up in private practice in London with Robin Mallalieu in 1987 to form Brady Mallalieu, an award-winning practice specialising in contemporary sustainable design. She is not only a successful architect but also an artist, jewellery designer and TV broadcaster.

Kathryn Firth, grew up in the first planned suburb in North America, where  women were simply not expected to work. She studied in Toronto and at Harvard, and practised as an architect before coming to the UK to become Chief of Design, Olympic Park Legacy Company.  Her tip for success:  don't accept the macho culture fostered in architecture school that good design can only be attained by putting in long hours.

Christine Murray is Canadian and took on the post of AJ editor with plenty of journalistic experience but little knowledge of architecture. She engagingly tells us that after reading the results of the workplace survey, she learned a personal lesson and decided to ask for a payrise herself. Her tip: realise your worth and put forward a good argument to be rewarded for it.


Deborah Saunt was born in Australia, studied in Scotland and set up award-winning DSDHA with partner David Hills in 1989.  Her tips for success: Never apologise, size dooesn't matter and think of success as counterpoint, not a crescendo.

Alison Brooks came here from Canada, made her name as an emerging architect and now runs her own practice ABA. She believes that more women should be included in master planning and that large practices should offer opportunities for smaller practices. Her tip for success: keep a sense of humour and play music in the office.

Liza Fior, London born and the only speaker to come from the UK, set up all woman practice muf in 1996 because she saw herself bolshie, idealistic and thus utterly unemployable. Her tip: don't assume you can simply schedule in having children at 38.


Anna Gagliano, is a Brazilian who studied architecture and town planning in Sao Paulo, where women were in the significant majority. She came to the UK in 2000 and is now Head of Global Knowledge at AEDAS. Her tip: exploit the power of information technology and networks.

As I mingle with the crowd later, I recall a conversation a couple of years ago with Dame Judith Mayhew Jonas (born in New Zealand) who amongst other things is Chairman of the New West End Company, which represents 600 businesses on Bond Street, Oxford Street and Regent Street and which is currently engaged in major construction works.  We were joined by Patricia Hewitt (born in Australia) who was building a non executive director career after retiring from the Cabinet where she had been Secretary of State for Health and for  Trade and Industry. The two women talked about how the decision to move to a different continent had given them a particular determination. As Dame Judith said, "I think it was somehow easier for me as an outsider," she says, "I wasn't constrained by attitudes."

So do you have to be a real pioneer to build a successful career?  Comments welcome.