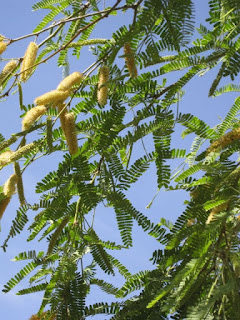 Green fingers in the desert
Scottsdale is a charming suburb of Phoenix, full of wide boulevards and smart houses sitting in large plots shaded by palo verde and acacia trees. The temperature is still in the 80s when we check into the Best Western Sundial Hotel around 8 pm. As we step into the lift a little boy of six or seven scuttles in beside us, bare-foot, wrapped in a towel, hair dripping water into his eyes and over our suitcase. "How's the pool?" we ask. "Cool, " comes the reply.

We resist the temptation to head for a swim too, opting instead for a shower before going online to find somewhere nearby for dinner. We discover that in Arizona nearby means a short car journey rather than a leisurely stroll, but eventually find ourselves in a southwestern steak house enjoying local beer and a tasty meal served by a tall slim young woman in Stetson and beautifully tooled cowboy boots.

We meet the little boy again over muffins and juice at breakfast. He is the fourth child of five, visiting Arizona from Vancouver with his parents in a Winnebago. His mother tells us that today’s treat is a visit to Phoenix Zoo, which reminds me of a chance encounter some 10 years ago on a boat taking us to the Great Barrier Reef from Port Douglas, Queensland. A group of charming American women engaged us in conversation.  Hearing we were looking for somewhere interesting to stay, they waxed lyrical about an eco resort further up the coast, describing cabins on stilts nestling in the rain forest, turtles swimming under the glass floor of the dining room and night excursions to spot tree climbing kangaroos. We found the resort after a long drive on a dirt road, and they were right, it was magical.

However our destination today is to see the flora, rather than fauna, of Arizona, by visiting the city’s Desert Botanical Garden in Papago Park. Considering that we have been travelling through desert for the past 120 or so miles, surrounded by cactus, palms, mesquite and palo verde trees, it, one might wonder what surprises await but as the place gets rave reviews on Tripadvisor and other websites, we set off to make the most of the relatively cool morning.

The reviews are right. From the moment we enter the 145 acre site, there is something to feast the eyes. By the ticket office, shimmering in the sunlight,  are three tall, brilliant green, spiky plants.  Closer inspection reveals that they are made of glass, by the extraordinary craftsman Dale Chihuly, and are called Desert Towers. They are as eye-catching, albeit not as tall, as his 30 foot high red glass Olympic Tower admired 18 months ago in the foyer of the Concert Hall in Salt Lake City.

A tall man, wearing a sunhat and stylish jerkin with Desert Botanical Garden logo, comes up to greet us as soon as we walk through the gate. A landscape gardener by profession, he is one of the 1,140 volunteers who help keep the garden open every day of the year except 4 July, Thanksgiving and Christmas Day. He tells us that there is a tour beginning in 20 minutes, and suggests that in the meantime we could take one of the shorter trails to see the spring desert flowers area.

Although it is early in the morning, there is already quite a crowd gathering, and on our walk we find a number of photographers armed with tripods and very impressive cameras setting up with great concentration close to some of the more spectacular blooming cactus and succulents.

We return to the tour point, to meet our docent Charles, who tells us that he has chosen three variations on a theme: desert plants that get nourishment through their roots,  through their bark and through their leaves. We learn that the beautiful palo verde tree, the state tree of Arizona that marks the arrival of spring with its abundant yellow blossoms, has adapted to desert life by photosynthesizing through its bark, which remains soft and green. This allows the leaves to reduce almost to needles, decreasing water loss through evaporation and transpiration, which means that these trees flourish with minimal water and provide welcome shade in high temperatures.

Charles is a great guide, not only sharing his personal knowledge but also patiently answering our questions. No, you cannot get water by cutting a piece from a saguaro cactus  (not even if you are John Wayne).  The best tequila is made from the heart of the Blue Agave, which is pollinated by bats and takes 12 years to reach maturity.

Spotting a strange plant that looks like the inspiration for the Triffids in the seminal John Wyndham sci-fi novel, Charles tells us that this was a cactus that was bent over in the unusual frost that hit Arizona earlier in the year. The plant will never recover its normal position, despite the significant rise in temperature during the summer months.
We spot other strange plants too, including cactus that look like a slither of snakes crawling over an acacia tree, which we nickname Medusa's hatbox.

Small tables are set up in shady corners along the trails, where volunteers demonstrate other interesting botanical facts.We see how native American Indians make use of every part of the strange succulent plants that survive in the harsh desert environment. For example stripping the fibres from agaves, aloes, yucca, devil's claw and bear grass to weave shoes, baskets and other utensils. 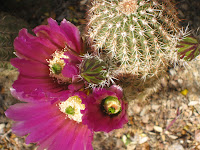 Every now and then, as we walk through the trails cleverly laid out to reflect the variety of terrain in this vast State, quail scurry across the paths in front of us, and a pair of tame roadrunner birds sprint  along in the hope of picnic food. We sit in the shade near the lecture theatre, sip prickly pear iced tea and read some of the literature we collected on arrival. We discover that the Desert Botanical Garden was founded in 1939 by a woman, Gertrude Divine Webster.

An environmentalist ahead of her time, Gertrude Webster gathered a small group of fellow citizens to create a botanical garden whose precepts would encourage an understanding, appreciation and promotion of the uniqueness of the world's deserts, particularly the Sonoran Desert in South Arizona.  Today the Desert Botanical Garden is an internationally recognised centre, running a school, educational and conservation programmes, gardening information resource and plant nursery, and a series of music, exhibitions and and other events throughout the year.
The involvement of women continues too. Nina Mason Pulliam was a business leader, journalist and humanitarian who left her substantial assets in a charitable trust to support causes in her home states of Arizona and Indiana.  In 2002 the trust contributed to a $17m expansion at the Desert Botanical Garden including the construction of a Research and Horticulture Center in her name.

In 2008, another $17m expansion project was undertaken, including the construction of new cactus and succulent galleries funded (and named after) the trust set up by  Sybil B Harrington. She was not only an ambassador of the arts nationally and in her native West Texas, but she also had a keen interest in preservation, particularly in the southwestern states.

We resolve to return, to explore more trails, visit the butterfly enclosure, the research centre, talk to the knowledgeable volunteers and perhaps take in a concert. The Desert Botanical Garden confounds the view that the desert is a barren place, thanks to a determined plantswoman and the dedication of those sustaining her legacy. 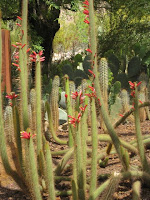 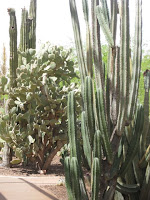 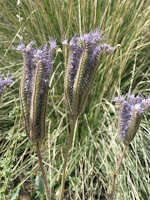 All photographs by Sandi Rhys Jones
Posted by sandirhysjones at 19:04

Great stuff. Great pictures - want to travel again after reading that - too easy to forget all the strange stuff that's out there and right now eighty degrees sounds great!