Back in Tuscany a year after the visit that laid me low (see Discovering a dynamic Duchess) and we are catching up with lost opportunities. So on a hot and sunny Saturday we decide to go to the place that any engineer and self-respecting lover of fine buildings must go when in northern Tuscany. We are off to Pisa, the place where an extraordinary structure has defied expectation and gravity to remain vertical (but not perpendicular) for more than 800 years.
We take the scenic route via San Giuliano Termi rather than the autostrada. This turns out to be a treat. San Guiliano Termi is a charming sun-kissed, tree-filled place high in the hills above Pisa, with that particular air of elegance and calm that typifies spa towns from Leamington to Vichy, Cheltenham to Baden Baden. The little square has a view of the ornate facade of the main spa, and a traditional bar serving excellent coffee and light, sweet pastries.
On the road again, and as the temperature rises to 33 degrees we twist and turn steeply down to the plain of the Arno. By good fortune we find a parking space just a short walk from a gateway through Pisa's high and ancient walls. By even greater fortune, the gate turns out to be the closest point of entry for the area known, quite rightly, as the Campo dei Miracoli (the Field of Miracles).

The Duomo, a glorious cathedral filled with light and space. The Baptistry with its magical acoustic, the Cemetery with its simple windowless walls stretching the length of the square.
The Leaning Tower is there, in all its breathless, idiosyncratic splendour, amongst a group of extraordinary buildings which rise in cool, confident beauty above the souvenir shops, tourists jostling for the perfect photograph, students clutching MacDonalds bags and squawking into mobile phones.  And how heartening to know that it is a calm, self-effacing, British engineer who has succeeded in stabilising the tower, which has been challenging great minds since beginning to lean shortly after construction began in 1173.

Professor John Burland, of Imperial College London, was the man who convinced a multi-disciplinary committee, set up by the Italian Prime Minister in 1990, that soil extraction was the solution. (The only other non-Italian on the 14 strong committee was an American who died of a heart attack in 1996, believed to have been largely caused by the stress of the Pisa challenge.)

The need to resolve the situation became acute in 1995 when despite various attempts, including tensioned cables and lead weights, did not prevent the lean becoming a lurch and the world thought that the tower was on the brink of collapse.

Similar to microsurgery, Professor Burland's proposal entailed drilling out slivers of soil, using using delicate, Archimedes-screw drills from beneath the northern side of the tower - away from the lean - and allowing gravity to coax the structure upright. It had the advantage of not touching the tower itself, thus keeping art historians happy. 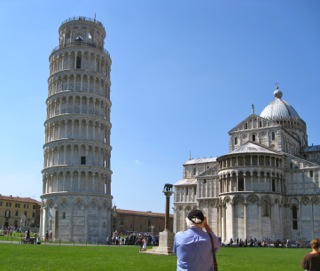 Even when the Burland proposal was adopted, it was not until 1999 that work began. Twice a day, for the next two years, details of the movement of the tower and the surrounding earth were sent to Professor Burland, wherever he happened to be in the world, for him to calculate how much soil was to be removed over the next 12 hour period. In total 70 tonnes were removed and in 2001, to joy and relief of all, the Leaning Tower was not only re-opened to the public after ten years, but was also declared stable for at least the next 300 years.
Not content to rest on his laurels, Professor Burland then set about identifying why the tower was leaning and discovered that there was significant difference in the water table between the ground to the north and to the south. This provided the information necessary to manage and drain the soil appropriately to create a more stable foundation. A miracle of engineering to save a wonder of the world.

All photographs by Sandi