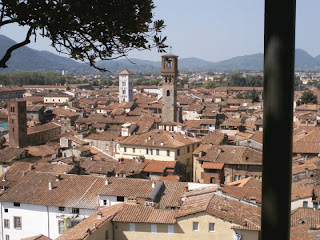 Last week I drove around the great walls that still completely enclose the mediaeval city of Lucca in Tuscany. I was en route from Pisa airport to stay with friends in the mountainous and lush Garfagnana, where the Serchio River runs between the Apuan Alps and the Appennines.
There was no time to linger then, in the late afternoon, but it confirmed a long-held wish to visit Lucca - in fact, ever since my cousin Andrea introduced me, several decades ago, to a relation who lived there. This exotic visitor to my aunt's house in Middlesex was, at 14, only a couple of years older than Andrea and me, but she was clearly rather affronted that neither of us had ever heard of her wonderful home town. My mother, always concerned to find a topic to smooth over awkward social situations, enthusiastically chatted about her new winter coat with its luxurious Lucca lamb collar, which was very much the thing in the late Fifties. (Quite how we were related to this young girl has been lost in time, if in fact I ever knew.)
So in preparation for putting right this gap in my experience, I relaxed on the terrace with a glass of Prosecco and the Michelin Guide to Tuscany and Umbria. This paragraph jumped off the page. 'For a very short period in the early 19th Century, Lucca was a principality and life in the city was dominated by one woman, Elisa Bonaparte. She was crowned Princess of Lucca and Piombino by her brother Napoleon, after his conquest of Italy. From 1805 to 1813, aided by her husband Felix Baciocchi, she ruled decisively and wisely over her principality and showed a remarkable talent for managing affairs.'
Intrigued, I set about finding out more. Maria Anna Elisa Bonaparte Baciocchi Levoy, Princesse Française, Duchess of Lucca and Princess of Piombino, Grand Duchess of Tuscany, Countess of Compignano was definitely a constructive woman. Her enthusiasm for the arts (her Paris salon was a popular spot) was not inhibited on being sent to Lucca - the ‘dwarf republic’, as Napoleon rather dismissively described it. Elisa quickly demonstrated not only patronage but also business acumen and vision, in eight short years bringing about great change. 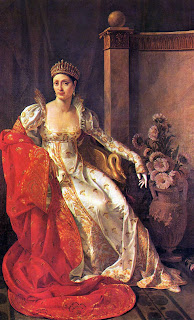 Shortly after Elisa arrived in Tuscany, Napoleon transferred ownership of the renowned marble quarries of Massa and Carrara from the Kingdom of Italy to Lucca. Elisa immediately established the Académie des Beaux-Arts to host the greatest sculptors and thus make Carrara an exporter of marble statues - which had a greater value than the raw marble. She also set up the Banque Élisienne to give financial aid to sculptors and workers for marble taxes.
The following year, 1807, Elisa established a committee to encourage and finance the invention of new machines and new techniques to increase agricultural production in the territories, including experimental plantations such as those of mulberries at Massa, where a silk school was created in 1808.
Elisa also embarked on a series of construction projects,bolstering Lucca's status as a spa town by her improvement of the architecture and decor of the town's baths. The palace was fully redecorated and the gardens improved, with the creation of a botanical garden with a menagerie and aviary. She also began road construction, notably the "route Friedland" to link Massa and Carrara, and an aqueduct into Lucca.
But some of the works provoked great opposition from the citizens, understandably less than enthusiastic about the foreign occupation of their city. For example, expansion of the princely palaces in Lucca necessitated the demolition of the church of San Pietro and she also razed an entire block to build a piazza in the French style in front of her city residence (now the seat of the province and the prefecture) which seriously affected the city's medieval architecture and almost sparked a revolt. In Massa, she demolished a cathedral.
Elisa was also concerned with the health and education of the inhabitants of her territories. She demolished Piombino's hospital to build a new one in the former monastery of San Anastasia and set up the Casa Sanitaria, a dispensary in the town's port. She instituted free medical consultations for the poor to help eradicate the diseases then ravaging Lucca's population.
Elisa set up a number of schools, including the first secondary school for boys in the principality. For girls, she began by establishing set curricula for convents that also operated as schools, then set up a body of "dames d'inspection" to verify that these curricula were applied. Teaching of girls aged between five and eight years old was made compulsory, though the laws were not always well applied. She founded the Institut Élisa for noble-born girls, to produce ‘well-educated and cultivated future wives’. Three years later, in 1812, Élisa set up an establishment for young poor girls, the Congregazione San Felice, though this did not long outlive Élisa's fall.
As fall she did. In her role as Grand Duchess of Tuscany, she did not have the autonomy that she enjoyed as Duchess of Lucca and frequently clashed with her brother Napoleon over implementation of his edicts. However she did not rebel as forcefully as her brother-in-law Joachim Murat, King of Naples (married to her sister Caroline). Murat supported the rights of his subjects over loyalty to Napoleon and joined the enemy Anglo/Austrian forces, which overran Tuscany and the principality of Lucca.
The pregnant Elisa was forced to abdicate and flee the country, moving from place to place in France and Austria, suffering imprisonment after Napoleon’s exile to Elba but eventually succeeding in her wish to return to Italy. Showing that she had lost none of her energy, she acquired a country house near Trieste and began financing archaeological digs in the region. In June 1820 she contracted a fatal illness, probably on an excavation site, and died two months later aged 43. She was buried in Bologna.
As for my stay in Tuscany, I too suffered a fall, but in a more literal sense than Elisa. A wet bathroom floor resulted in a broken arm, curtailing excursions to Lucca. But I shall return next year to visit the place where a determined woman left such a mark.
Artistic footnotes
The availability of fresh plaster inspired this portable fresco of our view of the Garfagnana and its villages by husband Roderick. 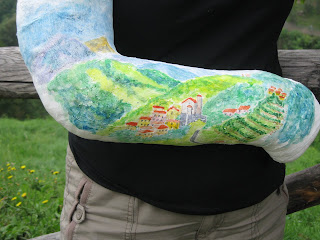 Photograph of Lucca by was by Hosseman, courtesy Wikipedia.
The portrait of Elisa was painted in 1805, the year she became Duchess of Lucca, by Marie-Guillemine Benoist who was one of that rare breed, a successful woman artist. More about her in my next story.
Posted by sandirhysjones at 20:27