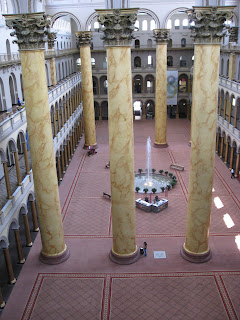 On my desk as I write this, is a wooden inch/cm rule, carrying on its reverse side the words Women rulers: 20th Century Architecture and Design followed by the names of 23 women (the first born in 1856 and the last in 1944) and their most significant construction achievements.
I bought the ruler in July this year in the magnificent National Building Museum in Washington DC, completed in 1887 as a monument to those who had survived the American Civil War and those who had not. In addition to administering and paying pensions, the building’s huge, light and airy Great Hall, was the venue for Presidential inaugural balls for many years.
Some eighty years later, unoccupied and threatened with demolition, the building was reprieved thanks to one of those ‘women rulers’, Clothiel Woodard Smith, whose report The Pension Building: A Building in Search of a Client recommended that it be converted to a museum of the building arts. Now listed on the National Register of Historic Places, the building is an award winning museum, with highly regarded educational and outreach programmes, constantly changing displays and has once again become a venue for great events.
So against a background of falling numbers of women at Fellowship level and at the top of organisations, let us hope that the tide may now turn. As one of the 0.9% of CIOB Fellows who is female, I am delighted that this year sees the election of Professor Li Shirong as not only the Institute’s first woman president but also its first international president. Dr Jean Venables is President of the Institution of Civil Engineers, Ruth Reed is President Elect of the Royal Institution of British Architects and Janet O’Neill is President of the RTPI. Significantly, these three women run their own practices, as did Clothiel Woodward Smith, (and myself) drawing some interesting conclusions from the findings of the CIC Diversity Survey that very few women in construction are self-employed. Many of those that are, seem to achieve great things.
Posted by sandirhysjones at 13:29