Who says Americans don’t do irony?

The National Museum of Women in the Arts in Washington DC is housed in what was once an all-male domain - a Masonic Lodge. Who says Americans don’t do irony? 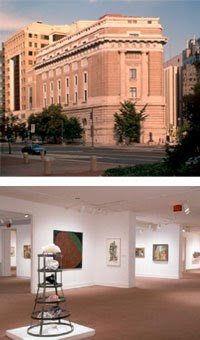 A visit was essential. Stepping from the blistering heat of the street into the cool marble atrium of the imposing wedge-shaped building was just the first stage of a refreshing visit. A magnificent sweeping staircase, ballustraded galleries, intricate plasterwork and glittering chandeliers combined with cool and spacious areas to showcase a variety of works of wonderful quality from the 16th Century through to the present, from paintings to sculpture, jewellery to photography, textiles to metalwork.


The NMWA was the culmination of an interest in women artists triggered by a still life painting by the early 17th Century Flemish painter Clara Peeters, bought by Wilhelmina and Wallace Holladay during a trip to Europe in the 1960s. They discovered that very few art dealers, collectors or scholars were familiar with, or interested in, works by women. The Holladays embarked on an interest that became an obsession and by 1983 the collection of works and books had outgrown their Washington home. Wilhelmina set about raising the funds to buy a property to house the only museum in the world dedicated exclusively to displaying works by women artists of all periods and nationalities.


Wilhelmina Holladay was determined and remarkably successful, raising sufficient money in two years to buy the 78,810-square-foot Masonic Lodge, an historic (albeit derelict) Washington landmark together with the next door theatre. The extensive and challenging renovation programme was masterminded by Dr Anne-Imelda Radice, a distinguished art historian and museum curator , and the resulting building won numerous architectural awards.

Inevitably there was carping about the concept of a museum solely for women artists. One reviewer wrote after the opening show, that feminists had anxieties about an institution many regarded as elitist and disempowering. "For now, artists are caught in a double bind. Damned if they do enter the collection, and damned if they don't." 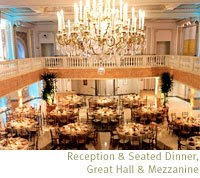 But the museum has proved to be a success. Since NWMA opened in 1987, the permanent collection has grown to more than 2,600 works by 700 artists, a wide range of educational programmes have been established. 140 special exhibitions taken place and nearly 200,000 people have become members.

And just to remind us of the need to recognise the achievements of women in the arts, my eye was caught by one particular work by Lee Krasner. Wife of the unfaithful, alcoholic artist Jackson Pollock, who was killed in a car crash ten years after they married, it took several more years before she achieved recognition as a successful artist in her own right.

Hanging above the picture are the words of her teacher Hans Hofmann, leader of the Abstract Expressionist movement in the USA.
"This is so good you would not know it was painted by a woman."
Posted by sandirhysjones at 23:30