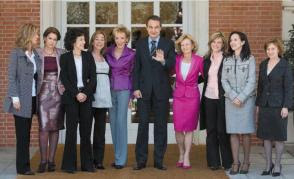 As I sat in the air conditioned comfort of a condo in hot, steamy Washington DC, reading in the New York Times about the decision of the US Army to break tradition in order to allow a woman to reach the top (see Thinking out of a five sided box), I was reminded that Spain has also recognised women as top warriors.

The line-up of the Spanish Cabinet announced by Zapatero not only showed women out-numbering the men (nine female ministers out of 17) but also the appointment of heavily pregnant Carme Chacon as Minister of Defence. She immediately pledged to boost the number of women in Spain's armed forces, which first allowed female members in 1988.

In France too, Prime Minister Sarkozy has feminised his ministerial line-up, with the appointment of 11 women in the 33-member administration, including seven out of 16 Cabinet ministers and three of the top five most senior positions. Christine Lagarde, head of US law firm Baker Mackenzie becomes the first woman to become Finance Minister, Michèle Alliot-Marie is Interior Minister and Justice Minister is the outspoken Muslim, Rachida Dati.

The reaction to the Zapatero appointments has been revealing. Italy’s Sylvio Berlusconi announced that Spain’s cabinet was ‘too pink’ and that there would difficulties in leading them. A telling comment from someone who is famous for his enjoyment of women’s company – and who has four women in his cabinet including a former topless model. Presumably this sort of occupation make women more accommodating when it comes to making important decisions than, say, an economist or four-star general.

As for the UK, the focus was sartorial rather than political, with much admiration for the elegance and grooming of the Spanish and French cabinet. One after another, national newspaper commentators drew unflattering comparisons with the dress sense of British female politicians –The women of Dowdy Street being a particularly popular headline.

What a pity the opportunity was missed to identify the skills and attributes of women making it to the top in politics, by the celebrity focus on frocks and hairstyles. Moreover, glasshouses and stones came into my mind, as I recall how often I am shocked by the singularly scruffy appearance of many women journalists (and I am speaking as someone who spent several years as one, including a stint in the fashion industry).

My view is that women and men should be properly dressed for their work. Being smart, appropriate and well groomed is a must for those are running affairs of state. It is good to see that now he is Prime Minister rather than Chancellor of the Exchequer, Gordon Brown no longer insists on wearing a brown lounge suit to attend white tie dinners at the Mansion House, an unnecessarily distracting affectation.

At the other end of the working life spectrum, it is still difficult for women working in construction to obtain easily the right size clothing, particularly boots and protective wear. Presumably with General Anne Dunwoody organising equipment for the Pentagon this will not be a problem for the women soldiers in the US Army.
Posted by sandirhysjones at 18:06

A friend of mine (Sq. Ldr) in the Air Force confirms your assumption. Clothing is one size fits all and its difficult to get a decent fit in most clothing as women are simply different shaped to men.

Women in our (construction) teams do face similar problems, but suppliers are waking up to the challenge. Glove and boot suppliers in the UK are particularly alert.