News from Cannes this week that after years of nurturing its reputation as the alcohol and testosterone fuelled event of the international property calendar, the organisers of MIPIM decided to issue a code of conduct for the hosts and delegates flocking to the week-long real estate conference with its fun filled activities on beaches, boats, ballrooms and barstools.  Reed Midem repeatedly warned delegates to respect all individuals and, astonishingly, reminded the 25,000 attendees that “under no circumstances does MIPIM register prostitutes.”

Attending the shindig as a woman has long been recognised as challenging at best and intimidating at worst, with groups including the Association of Women in Property offering survival guides and seminars to its members. Some companies recognise the hazards and try to support female staff. Some women have simply decided not to participate at all, regardless of the perceived impact of not being seen on la croisette. Women including internationally acclaimed architect Amanda Levete CBE for example, who said last month when receiving the Jane Drew prize, “I went to MIPIM once and decided that I would never go again.”

The timing of MIPIM 2018 made it inevitable that the spotlight would fall on its misogynistic reputation. After months of uproar on both sides of the Atlantic over the intimidation and harassment of women in the workplace (Weinstein, Trump, gender pay audits, resignations and accusations in politics and business etc), it was the Presidents’ Club at the Dorchester in London in January that finally made the UK property industry face up to its reputation. As Chris Grigg, chief executive of the UK’s second-biggest property company British Land said, the Presidents Club scandal had revealed the “sleazy underbelly” of the industry and businesses needed to do more to banish unacceptable behaviour and promote diversity and inclusion.

MIPIM took place just a week after an International Women’s Day that was celebrated with particular enthusiasm following months of protest over treatment of women in the workplace around the world combined with the 100th Anniversary of women in Britain first gaining the right to vote. 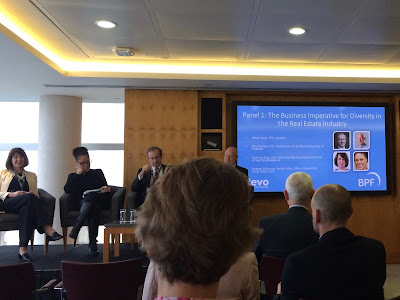 Encouragingly, for an industry claiming to have so few women in its workforce (and certainly one that seems to have difficulty finding them when it comes to jobs in top management and on boards) there were a heck of a lot of women in construction and property making themselves both visible and audible over the past few weeks. From the 500 who gathered to hear Crown Estate’s Alison Nimmo on 14 February at Women leading real estate, to the crowd that turned up for the Opening Doors diversity conference organised by the British Property Federation and Revo on 19 February, to the Inspire Me roundtable organised by Construction News on 1 March, when more than 80 women and men braved the Beast from the East for an 8.00am Monday start.

(Note to the St James Sofitel and other smart London hotels: businesswomen  need somewhere to sit down whilst they swap their rugged weather boots for smart shoes.)

And that’s before the week of events, conferences and the social mediafest that marked International Women’s Day itself. Never before have so many women engineers, contractors, architects, surveyors, planners, housebuilders, crane operators, scaffolders, lawyers, accountants, developers made their presence so confidently and positively felt. There was even a woman civil engineer on Question Time – Roma Agrawal, of Aecom. Just two weeks earlier, we learned that Rachel Skinner of WSP will become not only one of the youngest Presidents of the Institution of Civil Engineers in its 200 year history, but the second woman ever to take on the role.
So it is difficult to believe that the female percentage across construction and property remains so stubbornly around 15% (although figures are tricky and it varies across the disciplines), but perhaps it simply confirms my view that we should talk numbers of women, not percentages. After all, in such a large sector, even 15% represents an impressive number of individual women.

So what are the memorable comments that came out of this focus on women in the workplace? It was great to see and hear from a growing number of men both on the platform and in the audience at the various events and here's a selection.

Paul Brundage, President of the British Property Federation, described the President’s Club debacle as an incident that could take the property sector back decades, not to mention the personal embarrassment at explaining what had happened to his teenage daughter when she asked if that was the sort of thing he did. “We have a long way to go,” he said, adding, “It might be behind us for the moment, but we must not hide behind it.”

Brian Bicknell, of Shaftestbury Estates, who highlighted the problems created by Unconscious Bias and the need to campaign in a different way, “through persuasion rather than shouting.” Persistence too, he said, remembering the resistance to his organisation Freehold when first proposed, but now well established.

Alison Nimmo CBE, of Crown Estates, who after telling her audience that the worst boss she ever had couldn’t make decisions, advised them, “Trust your own judgment and just get on with stuff.”

Siobhan McKenna, of the GLA, talked about the Mayor’s commitment to sorting the gender pay gap and, as a mother of three, recognized the challenge that for many women, the cost of childcare can make it difficult to make working affordable. 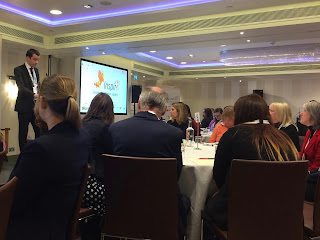 Beth West, who has recently joined Land Securities as Head of Development London Portfolio from HS2, talked about the importance of understanding the politics of work and how at first, she found the macho behaviour tough. Despite progress, there is still bad behaviour. “A wise person once told me that a corporate culture is the worst behaviour that the CEO will allow,” she says. “So if you’re a C-suite executive, don’t allow the bad behaviour.”

And talking of CEOs, Juliette Stacey of Mabey Holdings shares my long held belief that the changes needed to encourage more women in construction are the changes that will benefit everyone.  “Working practices have been so poor that it’s no wonder many skilled people chose not to return to our sector after the last recession, exacerbating today’s skill shortage,” she says. “Bringing more women into our sector, and ensuring they progress into more senior positions, will be essential if construction is to transform into a better and stronger sector.”
Juliette generated a gasp from her Inspire Me audience when recounting how only one man in the boardroom could look her in the eye when she was made CEO. That was only two years ago, but judging by the momentum that is being generated throughout the industry, we may be reaching a “Get over it moment’ for those who don’t believe a woman’s place is at the top of construction or property company.

So what about practical help? Here are some tips.
* mentoring schemes for women at all levels plus reverse mentoring for middle and senior management
* unconscious bias awareness training to improve recruitment, appraisal and retention (we all have UCB, it’s just a question of recognizing and dealing with it)
*  insistence on recruitment companies and headhunters broadening their search for women candidates
* make the most of your NEDs – they should be the critical friends who help change the culture.

And when it comes to that gender pay gap? Back in 1996, the first recommendation in my report Tomorrow's team: women and men in construction was that the construction industry should lead the way by establishing equal pay for work of equal value. It’s not too late, chaps.