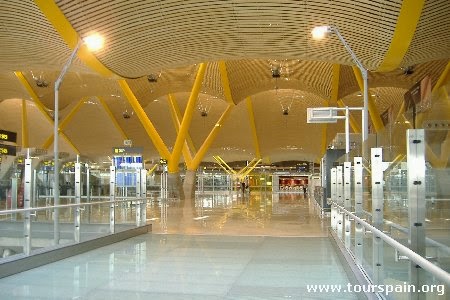 Madrid Airport’s Terminal 4 is a vast arching space with undulating, louvred panels floating wave-like above us, supported by golden yellow pillars. We feel not only rather small, but also a little lonely. In this vast space, there seem to be few fellow travellers – a sobering reminder of the monumental collapse of the Spanish economy. With a three hour wait until our connection to Santiago, Chile, we find a small, quiet restaurant. Wine is served only by the glass, rather than by carafe or bottle, but there is seemingly no limit on the number of glasses. Our order gets a little lost in translation, despite our best Spanish. Red wine instead of white, fish soup forgotten, but all is friendly and eventually sorted.

I muse over who designed this cathedral to the art of flight. Calatrava perhaps, that Spanish magician who combines architecture and engineering to create wonderful soaring and delicate churches, museums, bridges, railway stations and airport buildings? But how could I have forgotten that it was Richard Rogers working with Spain's Antonio Lamela, the project winning them the 2006 Stirling Prize,  and Carillion's TPS winning the Institution of Structural Engineers prize for Commercial Structures the same year.

At the departure gate, there are suddenly crowds of people, including a group of young men and women in bright red football strip. We learn that they are Team England, who are competing in the Homeless Football World Cup taking place in Santiago next week.  We chat to Gareth Parker, the charming chap in charge of the group who tells us that HomelessFA has been running for about five years in various cities in the UK, and is using football to help young people find a sense of purpose, teamwork, transferable skills etc. He is delighted that the charity has just gone into partnership with CentrePoint, which opens up more possibilities to change the lives of homeless young people through sport.

On boarding, we discover that despite consulting Iberia's seat plan and the oracle SeatGuru, the exit row for which I paid extra to ensure legroom is not an exit row at all. As I speak to the steward, in an effort to switch seats, a young Spanish businessman turns up to take the third of the four seats in the row and is as dismayed as we are. He too consulted SeatGuru to ensure an exit seat, he tells the steward. The steward promises to sort something, and sure enough returns in five minutes, spirits the young man off to an empty two seat row and tells us that we can have the whole four seat row to ourselves. We take off on time, at 20 minutes past midnight and not long afterwards, the cabin is darkened and most people try to sleep. Small baby close by is wakeful, but easily soothed. Unlike the two guys in the (real) exit row in front of the child, who snuffle, sneeze loudly and clear their throats exuberantly throughout the night.


Some 12 hours after leaving Madrid, breakfast is served and the aisles are filled with stretching, weary passengers. Then we realise that the central screens are showing real time film of our approach to Santiago. The Andes appear through snow and mist and ice crystals on the camera lens. Captivated, we watch as the peaks slowly come into view, their majestic, sharp ridges glowing in old rose and burnt siena in front of our eyes. Convincing us that we are indeed having a reality tv experience, the undercarriage comes down, roads, buildings and then the runway come into view. Puffs of white smoke appear as we touch down, the retro thrusters kick in and we begin a slow, graceful progress towards the terminal building.  Passengers break into applause, from enjoyment of the spectacle rather than relief at a safe landing.

Santiago is a stopover en route to our final destination, Stanley in the Falkland Islands – the gateway to the Antarctic. The purpose of the trip is to supervise the construction of the foundation for the memorial to those who lost their lives working in British Antarctic Territory and to make detailed plans for its dedication in February 2015. (See British Antarctic Monument Trust). The bronze and polished steel memorial is itself on its way to Stanley, on board the British Antarctic Survey ship James Clark Ross.
Our spirits rise when our luggage appears on the conveyor belt intact. The five threaded steel rods, each 500cm long and 16mm diameter, protected by pipe insulation and packed amongst socks, sweaters and shirts, did not set off alarms bells going through security. So it seems we will be able to achieve a key task in the project, embedding the bolts in concrete ready to receive and secure the memorial in its windswept position on Dockyard Point, its tip shining towards the Harbour Narrows.

Postscript: the women's team taking part in the Homeless Football World Cup had only been playing together for a few days before setting off for Santiago, yet reached the quarter finals before losing to Mexico. The men's team reached the final eight for the first time since joining the competition. Many congratulations to all.
Posted by sandirhysjones at 19:45