Telling tales in and out of school

As the unseasonably chill May wind sends leaves and dust whirling around the southern approaches to Waterloo Bridge, our little group of volunteers from the Association of Women in Property (WiP) gathers in the welcome warmth of the National Theatre coffee shop. We are awaiting the arrival of the other half of the team, which is walking from Lilian Baylis Technology School in Vauxhall with 125 students aged 11 and 12. By popular demand, we are repeating The Ladies Bridge, the roadshow with a difference.

The idea grew from discovering a documentary film made by historian Dr Christine Wall and film-maker Karen Livesey telling the story of Waterloo Bridge being rebuilt during World War II by a workforce that was 70 per cent female. The fact was written out of official history but well enough known to Thames Riverboat men that they still refer to it today as The Ladies Bridge. Two years ago, WiP Director Fiona Alfred and I decided that we could use the story as the basis to give school students an insight into the wonders of construction and engineering. Our instinct ( plus experience) told us that it might be easier to engage teachers and students with an intriguing story linked to the history curriculum than trying to sell a construction and property careers presentation.


Our instinct proved correct.The response was so positive, that the school has asked us to repeat the event - with twice as many students. So here we are again at Waterloo Bridge,with the temperature not much warmer in late May 2012 than it was in early December 2010. Nevertheless, the students appear to engage with the explanations of how to construct a bridge across a fast flowing river, with particular interest in the concept of expansion joints to allow the deck to flex in varying temperatures.

On return to the school, students' momentary dismay at the requirement to complete a picture quiz about the elements of a bridge is quickly dispelled on discovering that chocolate croissants are included in the roadshow programme. So we have a lecture theatre of 11 and 12 year olds relatively still and quiet after an hour's walking and fortified with a bakery treat - or brain food, as Fiona puts it. 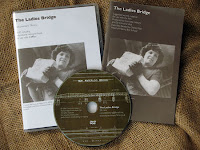 Lisa Jane Risk tells the audience something about her job as  Property Director at Bizspace, the UK's largest provider of managed workspaces, before giving them a slideshow featuring famous bridges around the world. We play a specially edited version of The Ladies Bridge film and then Cathy Stewart talks about her work as an architect and shows them plans and pictures of her projects. I follow up with telling them how structural engineer Jane Wernick devised how to make the London Eye stand up and keep turning. The questions flow until we have to stop for lunch. We learn that teachers have organised an afternoon of bridge building using drinking straws and other materials to keep the theme running.

We receive an enthusiastic letter from the Head Teacher, reporting that he has been stopped several times by girl students telling him about the event and that the WiP work is a highlight of the school year. The Assistant Head Teacher thanks us  for arranging and funding the roadshow, describing it as educational, enjoyable and thought provoking. He goes on, "The follow up work students did this afternoon showed they listened and learned a lot about bridge construction, the vast majority attempting something a little more adventurous than merely a beam bridge. Some teams actually modelled something that looked as though it could work and certainly took the weight of a heavy model truck."

A few days later, I receive the feedback forms from the students themselves, which make interesting reading particularly compared with the analysis of the event just 18 months ago. A significant group (38%)  enjoyed visiting Waterloo Bridge itself - a sobering fact discovered during the event was how few students had ever walked along the river or looked at the bridges. Unlike 2010, there were no complaints about the walk and a significant number positively enjoyed it. The number of students who say they know someone working in construction and engineering has risen and several commented that the reason there were more women working in the sector today was because of equality laws.

But perhaps the most telling finding was how many of this year's students (37%) said how much they enjoyed the film and the presentation because they liked  ‘facts’ and learning about the different bridges and how they were built. Following the toe-curling coverage of the Jubilee Flotilla by celebrities rather than experts, it is worth remembering that people - and especially young people - are hungry for information about our world. Buildings and bridges, and the people who design, construct and use them, have great stories to tell through the lens of history.  BBC please take note!