Rivers,  rodeos and rambling
The next stop on our journey is the Rim Country, named after the Tolkien-esque Mogollon (pronounced Muggy-own) Rim, a 7,000 ft high, 2 mile long escarpment which forms a geological barrier between the burning desert of South Arizona and the cooler mountains of the North. We are enticed by reading that the Rim Country is an outdoor lover’s paradise, with the largest Ponderosa pine forest in the world, trout-filled streams, hiking trails, fossil sites, a wealth of birds and wild animals including elk, deer, turkey, javelina, antelope, bear and mountain lion.

We leave Phoenix with the temperature registering 90 degrees F, but as the miles tick by, it grows cooler and the scenery changes from umber desert and chaparral to grey rocks, lush green forest and grassland.  Signs appear for towns  called Punkin Centre, Coffeepot, Pine, Strawberry. Rivers and streams abound, together with lakes formed by a series of dams harnessing the Salt River. The first and largest is the Theodore Roosevelt Dam, built in 1911 to  develop the settlement of the arid south west. The dams and reservoirs are linked by the Apache Trail (four wheel drive recommended) which reminds us that this was the region of  controntations with that legendary Native American Indian tribe.

We stop at Payson, the town regarded as the geographic centre of Arizona. Founded in 1882, when it was known as Green Valley, two years later the settlement held its first rodeo, and has held one every year since. This is definitely cowboy and Indian territory, encapsulated and popularized by the prolific storyteller of the wild west, Zane Grey, who built a cabin north of Payson on the Mogollon Rim. 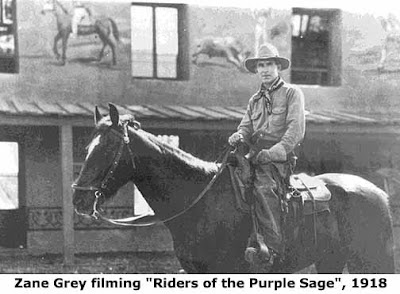 At the Tourist Information Office,  the hospitable officer talks enthusiastically about his time in England serving in the American Air Force, and his personal theory about how Gary Powers got shot down in his U-2 spy plane. He is impressed to hear that we own two venerable hardcover Zane Grey books - The Wanderer of the Wasteland and the one which became the best selling Western novel of all time, Riders of the Purple Sage. Our new friend recounts the tale of Grey’s visit in 1929, when he arrived with an entourage from Hollywood to film a documentary about bear hunting. But he had missed the bear season and the officials wouldn’t bend the rules for him. So Grey left in a huff, abandoning his cabin and marking the end of his love affair with Arizona in general and the Mogollon Rim in particular.

We leave with a couple of maps, trail guides and a recommendation to visit the local Native Indian craft store, which we do.  Initial excitement at finding a lovely woven basket in subtle Navajo shades at an affordable price is quickly dispelled when we spot the tag proudly declaring that it was produced in Pakistan. An attractive leather saddlebag comes from China. We retreat, buy fruit and salad and have a picnic lunch before going on to our destination, Kohl’s Ranch Lodge at Christopher Creek.
Kohl’s Ranch is a charming contrast to the Phoenix Best Western of the previous evening. The main building is a large wood and stone structure, with offices, lounge, restaurant and bar.  Accommodation is in a series of log cabins clustered along the sides of Tonto Creek, with their own stoops complete with rocking chairs. Each has a fireplace, kitchen and dining area as well as large comfortable bed and bathroom.

The cool temperature and the rushing of the wind in the high pines reminds us of a mild Spring day in the Cotswolds. We stroll along the grassy bank of the creek, and find a peaceful spot by the water. It inspires Rod to produce a watercolour and me to produce a haiku (the true significance of which requires memory of The Lone Ranger films on children’s television in the fifties.)

Back for drinks and dinner.  How can I resist a Zane Grey beer, not to mention an elk burger,  rounded off with blueberry pie? During the meal, the cheery waitress who is looking after all the tables in the busy dining room on her own, comes up. ”Excuse me?” she asks, and pauses. We look up. “Don’t want to disturb you folks, but is everything alright with the meal?” A refreshing change from the over-intrusive interruptions of some restaurants, and we thank her for her politeness.  She beams with pleasure. A few minutes later, the manager comes up, asks where we are from, tells us how much he loves England and presents us with complimentary glasses of the local liqueur.

We decamp to the lounge, to a large sofa filled with Indian weave cushions in front of a huge fireplace laid with logs. As we sip our coffee, in comes a hearty chap in padded jacket, announces himself as the fire marshal and proceeds to light the kindling.  The fire is soon crackling away. He tells two other guests that the fire pit will shortly be ready for the s’mores, nodding towards the glass doors that lead to the swimming pool and barbecue area. We see a large, round, stone fire pit with flames licking merrily.

What are s’mores, we ask? After initial surprise at our ignorance, our fellow guests wax lyrical about toasting a marshmallow until golden and soft and then sitting it on a slice of chocolate between two Graham crackers (digestive biscuits). The skill is in judging the softness of the marshmallow,  allowing it to melt the chocolate and then eating the whole lot without burning the mouth.The fire pit is not limited to ‘smores’ creation we discover, as during the course of the evening other guests arrive to cook sausages and skewered meat, which are eaten with great enjoyment at the picnic tables under the stars.

At dusk, while the big bats darted overhead with soft swishing of wings, and the camp fire burned down to red and glowing embers, Dismukes talked and talked. And always he returned to the subject of gold.  Extract from Wanderer of the Wasteland.

The next morning we discover that Kohl’s Ranch does not provide breakfast (hence the individual kitchens) although there is an ample supply of coffee in the cabin. We decide to take a good walk along the Horton Trail up towards the top of the Rim, to justify brunch in the recommended diner a few miles down the road. 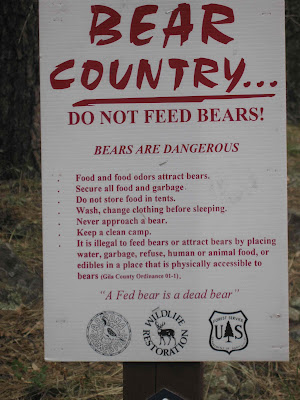 After half an hour’s walking, we meet two Rangers at one of the trail points. They tell us about a big fire the previous Easter weekend, when most of a family picnic group went off for a hike leaving a small child and its mother at the barbecue spot. The mother fell asleep, the small child played at poking the fire, burnt its hand on a hot stick and flung it away in a panic. The resulting conflagration took hours to control. I decide not to ask about recent bear attacks.

It is a wonderful walk, full of birdsong, rushing of the wind and the majesty of the tall pine trees, interspersed with ghostlike aspen trees with brilliant white bark and leafless branches against a clear blue sky. White violets cluster in the leaves underfoot. After two and a half hours, we decide that reaching the top of the Mogollon Rim is not a realistic target and turn back.

An hour later, as I am  enthusing about the many years service my tough but comfortable, Italian-made Crispi hiking boots have given, I stop and shake my foot,  thinking that I have tangled with a twig.

There is a flapping sound, and the sole peels neatly away from my right boot, remaining attached at the toe.

Laughing at the impeccable timing of the boot failure, we continue down the mountain, with me developing a sliding, snow-shoe style of walking. After half an hour, there is another flapping sound, and the sole of the left boot peels away too, as neatly as Charlie Chaplin's memorable filleting of his boiled boots in The Gold Rush.  I put my faith in the remaining partial layer of rubber and my thick Bridgedale socks.

Then, as we reach the small road that passes the Rangers’ Hut, we hear the sound of an engine. I wave my arm, flapping the two boot soles, and a pick-up truck stops. The two men are returning from a fishing trip, with cooler boxes full of trout on the back seat. They shove them along to make room for us, apologise for the smell (which we don’t notice) and are delighted to give us a lift down the mountain and back to Kohl’s Ranch. They reminisce about camping near the ranch as small boys, saddling up horses and setting off through the forests, hunting javelina and elk.

As we sort out the car in preparation for the next stage of our trip, we realise that we too have been reliving early memories. We are in real cowboy country, first brought home to me as as a child at Saturday morning pictures, the wonderful cinema of John Ford, Howard Hawks and Fred Zinneman. Many of them based on the books of Zane Grey.

We bought those Zane Grey books because they were beautiful hardbacks by the father of the  western, rather than for the prose which is often as purple as the desert sage. Zane Grey was the hunting, shooting and fishing macho man of the wild west, and also a man who loved women.

Zane Grey told Dolly before he married her that, "I shall never lose the spirit of my interest in women."  She seems to have accepted this behaviour philosophically throughout their marriage and he in turn valued her editorial skills, business acumen and affection. It was her modest inheritance that enabled him to give up his profession as a dentist and concentrate on writing. It was her business skills and practicality that kept them afloat through his profligacy and fiery relationships with publishers and film makers. Dolly handled all contract negotiations with publishers, agents, and movie studios and all income was split fifty-fifty between them. Just like another iconic American, Frank Lloyd Wright, there was a powerful and loving wife behind his success.

Zane Grey portrait, courtesy of the Zane Grey Museum.
All other photographs by Sandi Rhys Jones
Posted by sandirhysjones at 14:10