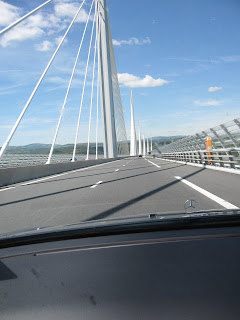 As someone who professes a passion for bridges, it has been something of an embarrassment to admit that several visits to France in the past four years have not included crossing the spectacular Millau Viaduct, the highest road bridge in the world.
But 2009 was the year to put this right and the wait - and the six euro toll - was well worth it. Driving across the Millau Viaduct is a breathtaking experience. Taller than the Eiffel Tower, the bridge soars high above the Tarn River Gorge, the seven slender piers reaching into the clouds and supporting the roadway with cobwebs of steel.
Only those people who suffer from a bridge phobia as acute as that portrayed by Michael Palin (in Alan Bleasdale’s entertaining drama GBH back in 1991) should turn down the opportunity to see this glorious example of civil engineering.
And it is a feat of civil engineering. Most of the world may believe that the bridge was designed by the British architect Lord Foster, (who includes the wobbly Millennium Bridge in his portfolio) but the official designer of the Millau Bridge was Michel Virlogeux (who has many wonderful bridges, including the Pont de Normandie, in his).

As Virlogeux expressed it, in an interview with New Civil Engineer magazine a few months after the opening of the project, "I'm the designer, he is the architect." http://www.nce.co.uk/le-concepteur/538054.article. Illustrating the difference between design and architecture, Virlogeux carries 100% risk for performance not related to construction. Responsibility for design was written out of Foster's contract, Foster's contribution to Millau is measured by its invisibility rather than by any obvious stamp of authorship. 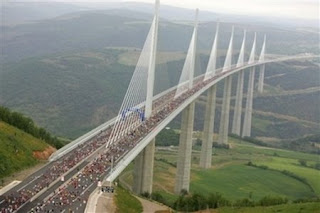 "The engineer must not be reduced to the man who does only computations. But nor must you reduce the architect to someone who just does the finishing touches. It's something that must be more integrated," says Virlogeux. The Millau grand projet demonstrates that such integration has been both effective and harmonious, with French engineer and English architect actively seeking further opportunities to work together.
Virlogeux offers the maxim used by the western world's first known engineer, Vitruvius, as a guiding principle. Utility and functionality, stability and durability, and beauty. In that order.
As he says, "The greatest art comes from making things very simple, but very elegant and perfectly adapted."