Fish and the Widow

This was the weekend that the clocks went back –and we made the most of the extra hour by getting round to hanging the long awaited jizai-kagi above the two metre wide open fireplace in our cottage in Gloucestershire. 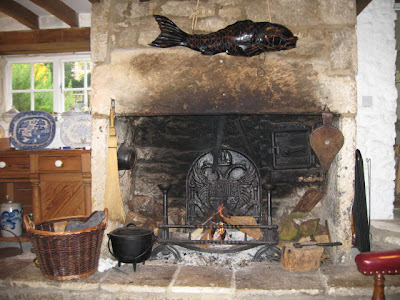 A jizai-kagi is an adjustable hook to hold cooking pots above the central fireplace in a traditional Japanese house. It is often in the form of a carved fish, in the hope that a symbol synonymous with water will give protection against fire destroying the wood and paper houses.

We first saw a jizai-kagi some 15 years ago, in a tiny shop in a village on the Nakasendo Way, a 500 km cobbled highway built in the 8th Century to link Kyoto and Edo (now Tokyo). We didn’t know then what it was for, but our decision not to buy the battered but lovely wooden carp –and to find some way of carrying it home safely – has been a source of regret ever since.

But we decided this year to resolve the regret, and after considerable sleuth work, we took delivery of a beautifully carved, very heavy, one metre long jizai-kagi in the shape of a carp, complete with pot hook, from a Japanese antique dealer based in Canada.

Off we went to the local hardware store to buy the fixings to hold our piscatorial insurance policy over the fireplace. A pair of hot dip galvanised staples, on back plates, were just the job and they were duly screwed into the elm beams of the ceiling. 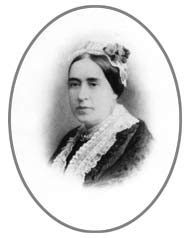 As I gathered up the packet that had contained the staples, I noticed the manufacturer’s name was Eliza Tinsley. Intrigued, I searched on Google to discover that when Eliza’s husband died in 1851, leaving her with five children under the age of 11, she took over his business, a company that made nails, chain, rope and hardware for agricultural, building and engineering use. Known locally as 'the widow', she built a reputation as a fair and knowledgeable businesswoman and the business thrived, becoming the largest of its kind in the West Midlands.

In fact, according to the National Census of 1871, around 4,000 people were employed by Eliza Tinsley, many of them outworkers living in the chainmakers cottages prominent throughout the region. They would visit the site once a week to collect materials and then would return the following week with finished product forged in their own outhouses.
It is very likely that most of these 4,000 people employed by Eliza Tinsley were girls and women, who dominated the Black Country nail making trade in the West Midlands at that time. According to Arthur Willets, author of The Black Country Nail Trade, it was common practice "for colliers and ironworkers to marry a nailing wench who was also expected to bring up the children while they followed more manly pursuits." 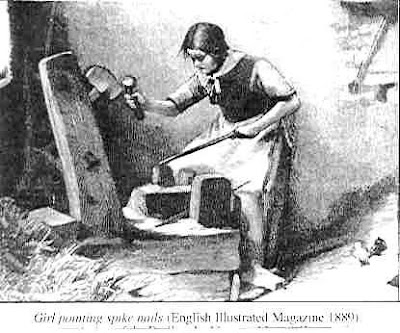 Those men who did make nails spent much of their time determined to keep their wages higher than those of the women, who at that time did not have the vote, let alone the benefit of the Equal Pay Act.

Today Eliza Tinsley http://www.elizatinsley.co.uk/ is a PLC owned by the Atlantic Group, making buckets and hydraulics for JCB and Caterpillar diggers as well as a huge range of chains, ropes and hardware. I would like to think that Eliza Tinsley’s reputation as a ‘fair and respected businesswoman’ meant that she was an enlightened employer. Perhaps establishing the ethos that led to the company deciding, 150 years after she became owner, to reduce dividends to shareholders to make good the shortfall in the company’s pension scheme for its workers.
As Andrew Hall, CEO of the group at the time said in a Moneybox interview in 2001 on BBC Radio 4, "My predecessors made pension promises to a whole group of people which we as a current management have a responsibility to honour."
Back to the matter in hand, we decided a toast was in order to celebrate the arrival of our beautiful fish guardian, hanging securely above the hearth thanks to an entrepreneurial woman ironmonger from the Black Country known as the widow. A bottle of Veuve Cliqot seemed appropriate.
Posted by sandirhysjones at 15:17

Can you point me in the direction of more information about jizai kagi? We are in the process of acquiring one, and I'm looking for more background info. Most of what I've found online is antique and/or auction listings. Thanks