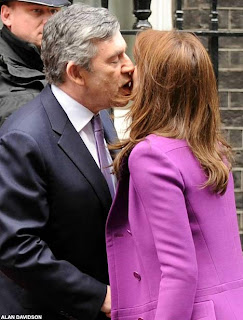 Another state visit, another outbreak of official kissing. Prime Minister Gordon Brown, not known for public displays of affection, surprised us all with his determination to kiss both flawless cheeks of the President of France's new wife and former supermodel Carla Bruni last week. Whether or not Prime Minister Brown was entirely comfortable in doing so, it appears that kissing is becoming part of the day's work.

It all seemed to start back in 2004. President Bush congratulated Condoleeza Rice on her appointment as Secretary of State with a kiss on both cheeks. Two days later, he congratulated new education secretary Margaret Spelling with a kiss, but this time full on the lips. Consternation in the media and much debate about whether this famously domestic president was simply brushing up his international credentials - and just how far this enthusiasm was going.

The following year, at the funeral of Pope John Paul II, Condoleeza Rice experienced the continental panache of French President Jacques Chirac when he opted to kiss her gloved hand rather than cheek. A few weeks later, Germany's Angela Merkel received the same treatment on her first visit to France as Chancellor. Prince Charles took the hand to the lips route with Mrs Sarkozy this week too.

However, it has been reported that Merkel is less enthusiastic about Mr Sarkozy's exuberant double cheek kisses. Political people watchers have certainly noted a variety of more cautious approaches to greeting Germany's first woman head of state. Tony Blair, a one cheek kiss. Vladimir Putin, hand shake and half embrace. Romano Prodi, the Italian Prime Minister, half embrace. Mr Harper, handshake and a pat on the shoulder. Japan's Shinzo Abe, handshake. And Mr Bush? A handshake.

The more measured approach would seem to be wise. This week businesswoman Christine Rich won £2million compensation for sexual harassment from PriceWaterhouseCoopers Australia after claiming a decade of harassment and bullying. She told the court that her boss repeatedly greeted her with a kiss, despite being told not to do so.

So I will stick to my own well established rule on the business of kissing at work, which male colleagues seem to find useful and keeps a simple level playing field in meetings. Before 6.00pm it is handshake only.
Posted by sandirhysjones at 02:01

Looks to me like Gordon needs some coaching in this continental artform. From memory, mouth slightly puckered, or at minimum closed, is de rigeur at point of contact. Perhaps he was trying to surprise la Sarkozy. Only Plod can tell.

Cool blog, I had not noticed constructivewomen.blogspot.com before during my searches!
Carry on the great work!